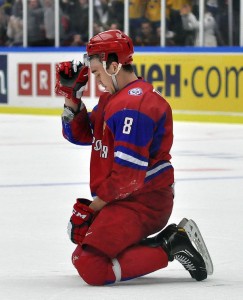 Tryamkin having a moment of silence for his competition. (Blake Gumprecht – Flickr)

It was 2,562 days or 7.01 years between the time the Vancouver Canucks drafted a Russian prospect. It has been 3,721 days or 10.8 years since the Vancouver Canucks have had a Russian player as a regular part of the roster.
The history of Canucks players from the Russian Federation in the modern era has been largely non-existent. This unspoken of wall seemed to finally fall at the 2014 NHL Entry Draft when new Canucks general manager Jim Benning drafted boom or bust prospect Nikita Tryamkin from Avtomobilist Yekaterinburg of the KHL.

Did the Canucks Draft
Ivan Drago?

When I woke up the morning of the second day of the 2014 NHL Draft, my eyes nearly popped out of my head when I saw the Vancouver Canucks drafted Nikita Tryamkin with a third round pick. Tryamkin is a 19-year old 6’7 defenseman who’s been something of a well kept secret in hockey circles and draws comparisons to Tampa Bay’s Andrej Sustr. The smooth skating Tryamkin was passed over in the past two NHL Drafts with scouts being wary of Tryamkin being left off Russian national teams for the World Junior Championships and other national junior tournaments.
Nikita Tryamkin appeared on the radar when he began play in Russia’s top league at 18-years old. Tryamkin was finally selected for Russia’s U-20 team at the 2014 World Junior Championships and distinguished himself with a three point +5 performance in seven games on route to a Bronze for his team. Tryamkin also drew comparisons to the character Ivan Drago from the Rocky films due to his size and icy cool play in the tournament. From his performance at the WJC Tryamkin finally attracted the attention of NHL scouts with the Lightning, Rangers and Canucks rumored to show interest. The Canucks selected Tryamkin 66th overall making the smooth skating giant defenseman the first Russian drafted by the Canucks in seven years. 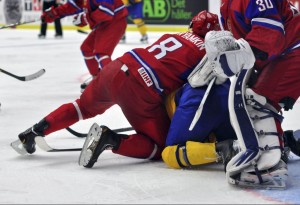 Tryamkin has shown an intriguing gritty side to his game. (Blake Gumprecht – Flickr) 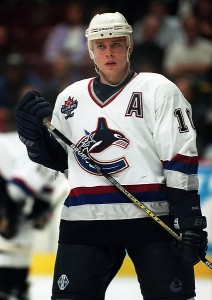 Pavel Bure (Hakan Dahlstrom/ Flikr.)
The drafting of Tryamkin marks the beginning of a revolution in thought for Vancouver. The Canucks were historically one of the first to bring Russians to North America. However the Canucks have had a notoriously difficult history with Russian players. The history of Russian Canucks brings about tales of Vladimir Krutov’s love of gas station hot dogs and the Canucks’ first true superstar Pavel Bure demanding to be traded.
The history of Russian Canucks also leads to stories of the organization being one of the first to send executives and players into the Soviet Union to recruit the best in Russian hockey. The last Russian to regularly suit up for the Caucks was fourth line center Artem Chubarov who infamously left his car at the Canucks’ arena while leaving for bigger money and more playing time in Russia in 2005.

The Modern Era of Russian Canucks 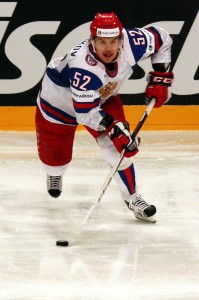 Sergei Shirokov playing in the 2012 IHWC.
In the modern era the Canucks had a habit of using late draft picks on enigmatic Russian forwards. Most never made it to North America but the two most noteworthy were Fedor Fedorov and Sergei Shirokov.
Fedor Fedorov managed two separate cups of coffee with Vancouver’s NHL squad in four years spent with the organization marked by inconsistent effort and rumors of a poor attitude. Fedorov was traded to the New York Rangers where he also received a cup of coffee before leaving for Russia permanently.
Sergei Shirokov is a skilled scoring winger drafted in the sixth round of the 2006 NHL Draft by the Canucks who made the transition to North American hockey in 2009. After an impressive training camp Shirokov managed a cup of coffee with the Canucks in his two seasons in North America before getting lost in the shuffle under general manager Mike Gillis. Shirokov was a two time AHL all-star in his time with the Canucks’ AHL affiliate the Manitoba Moose but never got a fair opportunity on the NHL team. In 2011 Shirokov signed a three year contract with CSKA Moscow of the KHL. Shirokov has gone on to become a two time all star and one of the leading scorers in Russia.

What Did Gillis Learn When He Was Bure’s Agent?

Former Canucks general manager Mike Gillis has deservedly received a lot of praise from the Canucks faithful. The team’s GM and President from 2008 to 2014, Gillis brought the Canucks the most success in it’s history. Under Gillis’ reign the Canucks also came one win away from aStanley Cup Championship in 2011. Yet Mike Gillis never drafted or signed a Russian player in his six years as the Canucks’ boss.
The Canucks unspoken of bias against Russian players led to several maligned moments in the Gillis era including missing out on drafting skilled Russian prospects; most notably Dallas Starsforward Valeri Nichushkin. Gillis also missed out on key free agent Russian scorers such as Alexander Semin. During the Gillis administration from 2008 to 2014 the Vancouver Canucks had the lowest amount of games played from Russians of any NHL team with only eight from Sergei Shirokov. 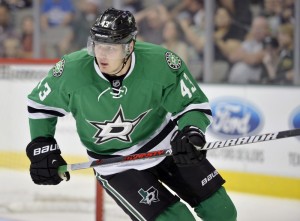 Did the Canucks miss the next elite Russian scorer? (Jerome Miron-USA TODAY Sports)

When former Canucks general manager Mike Gillis was fired in 2014, the Canucks fan base was unsure what to expect with the regime change. That uncertainty grew when former Canucks’ player Trevor Linden and Bruins’ assistant general manager Jim Benning were hired to head the managerial group for the team. Benning as the new general manager has made some controversial moves including trading away key players and taking the reigns of a necessary youth movement in Vancouver. However the biggest sign of change may be the drafting of a little known boom or bust overage defenseman from Ekaterinburg, Russia
Nikita Tryamkin.